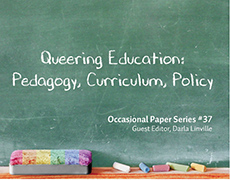 The call for proposals for this special issue of the Occasional Paper Series (OPS) was conceived in a moment of possibility and hope among advocates for LGBTQ+ youth during the summer of 2015, when the Supreme Court had just decided the case that allowed same-sex marriage to be recognized in all 50 states and at the federal level. This move led LGBTQ+ people, especially those in more conservative regions of the country or outside of large urban areas, to believe that they could call on legal powers to protect their families, jobs, housing, or relationships. They hoped that the random, bureaucratic violence and harassment they sometimes encountered might be avoided. And they looked forward to proudly announcing their existence, knowing that they could not be legally turned away. The OPS Call for Papers asked authors to imagine what might happen in schools now if a basic legal acknowledgment of LGBTQ+ equality was written into law.

The Gift of Hindsight: A Parent Learns about Educating Trans Youth
Denise Snyder

Changing the Shape of the Landscape: Sexual Diversity Frameworks and the Promise of Queer Literacy Pedagogy in the Elementary Classroom
Cammie Kim Lin

An Embodied Education: Questioning Hospitality to the Queer
Clio Stearns

“White People Are Gay, But So Are Some of My Kids”: Examining the Intersections of Race, Sexuality, and Gender
Stephanie A. Shelton 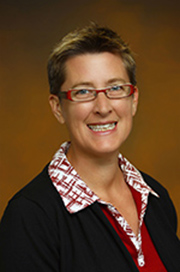 Darla Linville is an Assistant Professor of Educational Foundations at Augusta University in Augusta, Georgia. She studies the discourses around sexuality and gender in schools in the United States, and the experiences of LGBTQQ youth with education. She actively advocates for LGBTQQ youth in schools and in communities and has published several articles about LGBTQQ youth and young adult literature.