I am a citizen of two countries—the United States and Mexico—and I have a deep love of both, for different reasons. I believe that being a citizen of two countries allows me to be a partial outsider in each, which perhaps gives me an uncommon perspective on both. I know that there are those who argue that it’s impossible to be truly loyal to one country if one is also a citizen of another, and there are those for whom any criticism of one’s country is tantamount to treason. I reject both of those positions.

First, I believe that a patriot is a person who loves his or her country and therefore wants it to be the best it is capable of being. The United States has been the leader of the free world for most of the time that the majority of us alive today have existed. This sets a unique standard. I believe this means that we should not only be the best we can be for ourselves, but that we should also set an example for those we would lead. Importantly, to be a good leader, it is essential to know something about those one is leading. In other words, it is helpful to know what makes other countries good, or even best, at some things in order to build on those strengths and perhaps adopt them whenever possible, as well as to lead in a way that acknowledges the strengths of others. This, in my mind, is precisely why promising to “Make America Great Again” is antithetical to true leadership. Making America “great” without helping those we hope to lead also be “great” is the very abandonment of leadership and therefore false patriotism. 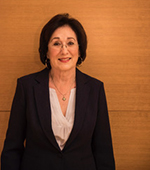 Patricia Gándara is Research Professor and Co-Director of the Civil Rights Project at UCLA. She is also Director of Education for the University of California-Mexico Initiative. Gándara is an elected fellow of the American Educational Research Association (AERA) and the National Academy of Education. In 2011, she was appointed to President Obama’s Commission on Educational Excellence for Hispanics. Her most recent books are The Latino Education Crisis (2009), Forbidden Language: English Learners and Restrictive Language Policies (2010), and The Bilingual Advantage: Language, Literacy, and the U.S. Labor Market (2014).